We’ve reported on Domino’s a few times, discussing their amazing tech innovations in their quest to sell pizza.–On a side note, car maker Chevrolet just announced that they added Domino’s to Marketplace, their in car infotainment system so Chey drivers can order pizza from their dashboard baord.
Well, they’re considering another future facing option.
Domino’s Pizza Inc. plans to start testing unmanned pizza delivery in Texas later this year.
Domino’s is teaming up with Nuro, a robotics startup run by former Google employees. For the first phase of the pilot program, a single location in Houston will deliver via one of Nuro’s fully autonomous vehicles. 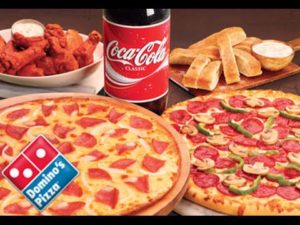 If the test is successful it could expand in 2020, according to the companies. Domino’s has experienced a shortage in delivery drivers due to the tight labor market (which has also affected a number of companies such as McDonald’s, Pizza Hut  and Walmart ). Domino’s has around 6,000 restaurants in the U.S. and, with the labor shortage, around 10,000 open positions nationwide, according to Kevin Vasconi, the company’s chief information officer.
Domino’s collaboration with Nuro will help the chain determine if autonomous vehicles are a way for its restaurants to keep up with demand during busy times when drivers are in short supply.

Other companies are considering autonomous vehicles also as they add various delivery options as a way to try to combat e-commerce giant Amazon.com Inc. Kroger Co. has done a test program with Nuro in Arizona and is currently using its autonomous driving technology in Houston.  Pizza Hut, who’s been falling behind rivals in omni channel purchasing option, teamed up with Toyota last year to work toward driver-less delivery.
Previously in 2017 Domino’s tested driver-less delivery vehicles in a partnership with Ford Motor Co. That program has ended.
Sintel Systems offers complete omni-channel solutions such as the Direct-to-POS online ordering platform. This system allows restaurants of all sorts to have a custom, secure website and mobile app to support customer ability for placing orders on the go. Using our omni channel approach customers can order with an employee using a hand held device at busy drive thrus, order from a kiosk, order from their phone or order from a computer. If they prefer, they can even order inside the restaurant from staff at the counter. All transaction from devices are seamlessly sent to the kitchen display system (KDS). Kitchen staff stays completely in the know of customer orders and what order to cook them in. That’s the goal of omni channel POS, service is provided to the customer where they want it, how they want it.