In 2018, restaurant experts predict tougher competition for the value-minded consumer. But that’s not all restaurateurs will have to worry about in the new year: Diners will increasingly want big, bold flavors. They’ll demand healthy ingredients, healthy-ish indulgences and drinks and dishes that look interesting enough to generate likes and comments on social media.

Here’s a look at nine trends restaurant experts predict will change the quick-service and fast-casual landscape in 2018:

Mind the pennies. Expect the value war to ramp up in 2018. In an era of low unemployment, many restaurateurs miss the fact that “a good percentage of our population is employed, but they’re not making a lot of money,” says Gary Stibel, founder and CEO of the New England Consulting Group. With widespread wage stagnation, restaurants must compete heavily on value for a wide swath of the population, Stibel says. And that task is complicated by price deflation in the grocery space. “The families that are struggling are buying it and buying it for less than they could a year ago,” he says of groceries. “It’s not just competition with each other; it’s competition for packaged food.”

It’s all about the show. Still, other portions of the consumer market will open their wallets to dine out—but they’re demanding more and more of that experience. Stibel expects restaurants to infuse their service with even more technology, both in ordering and for pure entertainment. And he expects more “theater,” in the store. By that, he means everything from open-kitchen concepts that allow diners to see their food being prepared to iPads at the table so the kiddos to can play games. “It’s going to be more of a social experience,” he says. “Because otherwise, people won’t get up, get in their car and drive to a restaurant.”

Think healthy. Kind of. The tug-of-war between demand for healthy, wholesome foods and tasty, indulgent ones isn’t going anywhere. Yet, Stibel sees a new frontrunner in that fight among quick-service and fast-casual restaurants. He says people “talk thin and eat fat.” Thus, he thinks indulgent options will win over the day. “But the smart money will have healthy and sometimes local ingredients in that 1,000-calorie entrée,” he says. “And that gives permission to indulge…We want to go out and stuff ourselves with great food, but we don’t want to feel guilty about it.”

Beverages go bright and bold. Exotic flavors are all the rage in the beverage category, says Natalie Sexton, marketing director of Natalie’s Orchid Island Juice Company, which sells its fresh and frozen juices in 34 states and 42 countries. Sure, there’s still plenty of demand for staples like orange juice. “But consumers are wanting diversity,” she says. “Obviously, the more exotic the better.” Expect beverages like charcoal lemonade, turmeric carrot juice and blood orange-based drinks to gain ground. Citrus, ginger and cayenne—all associated with cleansing—continue to soar, Sexton says, as well as matcha, the finely ground powder made of green tea leaves. “It was kind of coming around this past year,” she says, “and we think it’s going to be even more so in 2018.”

Black is the new rainbow. Black foods will be to 2018 what rainbows and unicorns—think Starbucks’ faddy Unicorn Frappuccino—were in 2017. Denise Purcell, head of content for the Specialty Food Association, expects foods made with activated charcoal to be all the rage in 2018, both for their striking appearances and charcoal’s reported association with cleansing and healthy digestion. “I think it’s a response to the rainbow, going in the opposite direction,” she says. “But what’s interesting is the role social media plays in some of these food trends.”

Instagram or bust. Speaking of social media, Purcell points out that the importance of food aesthetics will continue to grow in 2018. After all, platforms like Instagram and Snapchat helped grow the popularity of ingredients like beets, turmeric and matcha in 2017, she says, because “they make for pretty photos.” Consumers’ desire to constantly document dining out will continue to reshape how restaurants design dishes and beverages, but that doesn’t mean restaurateurs can sacrifice taste. “I think taste always matters,” she says, “and is always the deciding factor of whether something is really going to take off.”

What’s old is new again. Jewish deli items are enjoying a surprising resurgence, says Will Eudy, corporate executive chef at McAlister’s Deli. Diners across the country are discovering or rediscovering items like latkes, blintzes, smoked meats and cured meats. “Just because some of these flavors are 100 years old doesn’t mean people have seen them,” he says. “A lot of people have never been to a Jewish deli.” To that end, the Rueben and the New Yorker—a pastrami and corned beef sandwich—are gaining popularity at McAlister’s. And the Atlanta-based chain will test a new pastrami melt in 2018.

Contrasting flavors are in. Americans increasingly want spicy foods, Eudy says. But most are looking for more than just heat: “It’s about heat and flavor,” he says. Diners in 2018 will increasingly look for dishes that pair spicy flavors with sweet, savory or tangy tastes. To respond to that demand, McAlister’s will roll out a Jalapeno Turkey Crunch Sandwich and a Verde Chicken Sandwich, both made on a spicy jalapeno roll. The turkey sandwich finds balance in rich mayonnaise and avocado, while the tomatillo salsa on the chicken is shares the stage with garlic and cilantro. “Were looking at a dose of heat,” Eudy says, “but not so much heat that you can’t eat the whole thing and walk away wanting more.”

The need for speed. Diners are busier than ever. And that means speed and convenience will still reign supreme in 2018, says Amanda Topper, associate director of foodservice research at Mintel. Expect restaurants to continue leveraging technology to better serve customers. In addition to convenient dining options, consumers will increasingly care about innovative meals that are nutritious, tasty and photogenic. “In the year ahead, expect to see operators across segments shift to meet diners’ various needs as speed, innovation, and category competition become more pressing in 2018 than ever before,” Topper says in a news release. 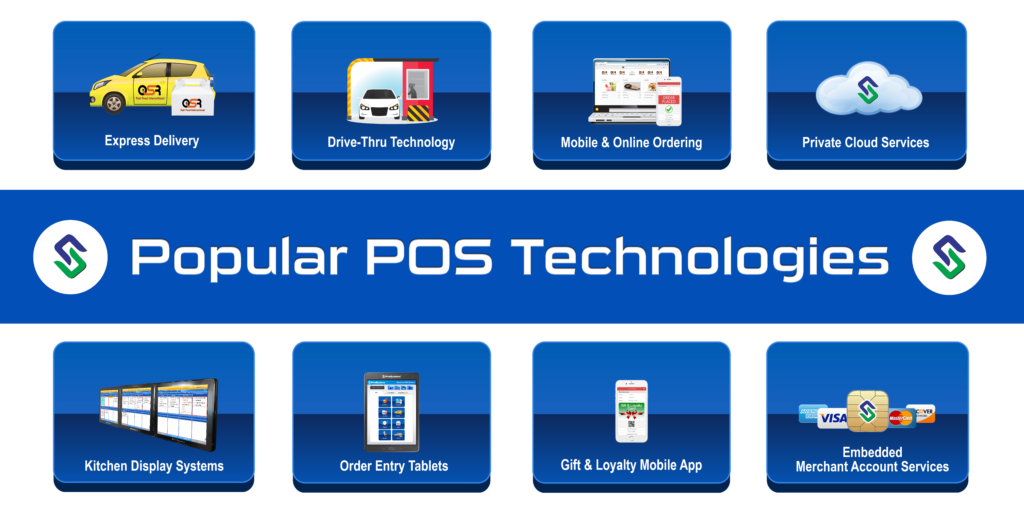 As you look to the future with the aim of keeping your restaurant prosperous, keep in mind the critical role your point of sale will play. At Sintel Systems, we consider our customers partners, and we share in success. That why we offer a single-source solution for all POS needs, and a support plan to cover every aspect: Hardware, software and all services including embedded merchant account services.

So whether you’re an established restaurant looking to update an old system or a brand new opening, look to Sintel Systems for the best Full Service and QSR / Fast Food restaurant POS systems. Offering private cloud services, online ordering, delivery, drive thru and more, Sintel Systems is the perfect partner to help your serve your customers, their way.