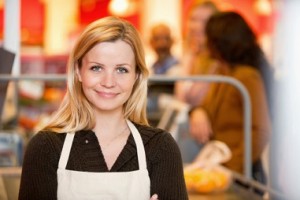 What are franchisers to make of the growing movement among low-wage fast-food workers in the U.S., demanding an increase from the current $7.25 an hour minimum wage to a $15 an hour living wage?
Just as we share our vast point of sale (POS) experience and expertise with startup owners in order to help them make the best decisions from the very beginning, we at Sintel Systems are happy to share articles, advice and commentary about the retail restaurant market.
Currently, these four factions have a clearly defined point of view in the situation:
– Franchisers want higher profits from cheap labor.
– Low-wage fast-food workers are protesting across the U.S., demanding a wage hike, from the current $7.25 an hour minimum wage to a $15 an hour living wage.
– Industry associations are demanding sweeping changes in, well, nothing.
– Consumers want competitive prices, but are concerned about shouldering the costs of food stamps and health care stemming from an industry addicted to paying a non-living wage.
So, yes, many players have skin in this game. Non-supervisory workers in the retail trade, who’ve not been particularly well-paid to begin with, have seen their inflation-adjusted wages fall almost 30 percent since 1973.
Predictably, the National Retail Federation (NRF) and the International Franchise Association (IFA) and the have come out against the wage hike.
In a related Entrepreneur.com article, “What Raising Workers’ Pay Would Mean for Franchise Owners, Consumers,” IFA president Steve Caldeira was quoted, “Mandating increased wages would lead to higher prices for consumers, lower foot traffic and sales for franchise owners, and ultimately, lost jobs and opportunities for employees to become managers or franchise owners.”
The NRF termed the worker strikes for more wages a “‘publicity stunt’ orchestrated by labor unions and asserted that “retail and restaurant companies pay competitive wages and many offer additional benefits.”
Entrepreneur.com disagrees, writing, “A full time minimum-wage worker currently takes home $15,080 a year, and the poverty line in the U.S. is $18,480 for a family of three.”
Leading economists aren’t buying the NRF’s argument either. “We have a lot of evidence on what happens when you raise the minimum wage,” writes Nobel Prize winning economist Paul Krugman in the York Times (NYT). “And the evidence is overwhelmingly positive: hiking the minimum wage has little or no adverse effect on employment, while significantly increasing workers’ earnings.”
In his NYT article, “Better Pay Now,” Krugman looks at cases where one state raised its own minimum wage while a neighboring state did not. “If there were anything to the notion that minimum wage increases have big negative effects on employment, that result should show up in state-to-state comparisons,” he writes, but “… it doesn’t.”
“For consumers, the impact of the striking workers’ demands on consumer prices has been hotly debated,” said Entrepreneur.com. “Some experts speculate that the cost of a Big Mac would rise anywhere from just 22 cents to nearly double the current price (around $4.50) if the minimum wage is raised to $15 an hour [while] others point out the implications for franchise owners and the potential that jobs would be lost to automation.”
Of course, those micro-economic estimates disregard larger, macro-economic societal effects. Writing for the University of California at Berkeley’s Labor Center, Sylvia Allegretto and others prepared a report, “Fast Food, Poverty Wages: The Public Cost of Low-Wage Jobs in the Fast-Food Industry,” which found that 52 percent of the families of core front-line fast-food workers are enrolled in one or more public safety-net programs at a cost of nearly $7 billion a year.
Less pay means more overall costs to society, when costs may be shifted in such fashion, and the public is catching on.
Here’s one important takeaway: Franchisers may want to consider communication strategies to inform customers that workers are being paid a living wage.
As the only full-service POS provider — from software development to franchise incubator to ongoing support — part of Sintel’s commitment to our customers and industry is to share ideas and information. Whether you’re a first-time franchise hopeful, a small business owner or an established chain, it’s always smart to stay on top of the latest news in labor issues to achieve financial success.
If you are interested in learning more about Sintel’s POS systems and how our knowledge and support can impact your future success, call us for a complimentary phone consultation.
Read the full Entrepreneur.com post here. Mr. Krugman’s NYT post may be read here, and the Berkeley Labor Center report may be read here.
Sintel Systems is the only full-service provider of tailored Point of Sale systems across retail, restaurant and service industries, including frozen yogurt shops, pizzerias, sushi restaurants, cafés and retail stores.
As a single source for business solutions, our experienced, knowledgeable team negotiates the complex POS landscape for you to enable you to find the right POS system for your business and budget. Hardware – Software – Support
Questions or Comments: Contact us 855-POS-SALES www.SintelSystems.com