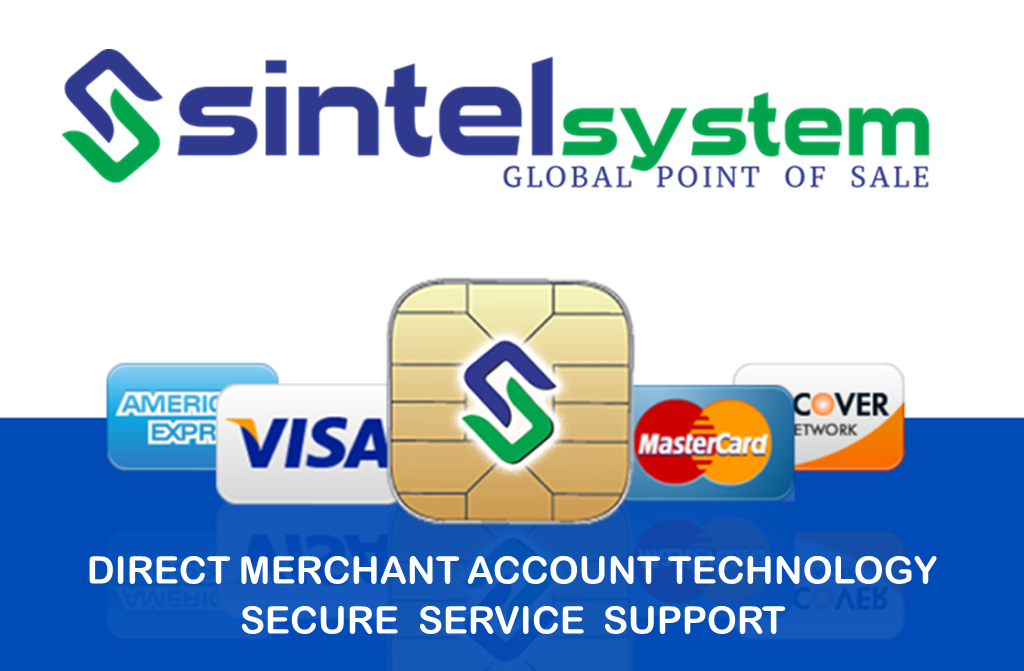 Sintel Systems Global POS offers the best merchant account services (credit card processing) with the highest level of Service, Support, and Security because we do not rely on third party integration. Our EMV (chip card) and PCI compliant merchant services are fully embedded with our POS systems giving you the peace of mind to process transactions securely and quickly at the low rates. While “integration” might seem good on its surface, it increases cost and lowers service when it comes to your POS system and merchant account services. Integration is defined as having multiple parties involved is a service when a single solution provider (Sintel Systems) have innovated to deliver it directly and without any third parties. 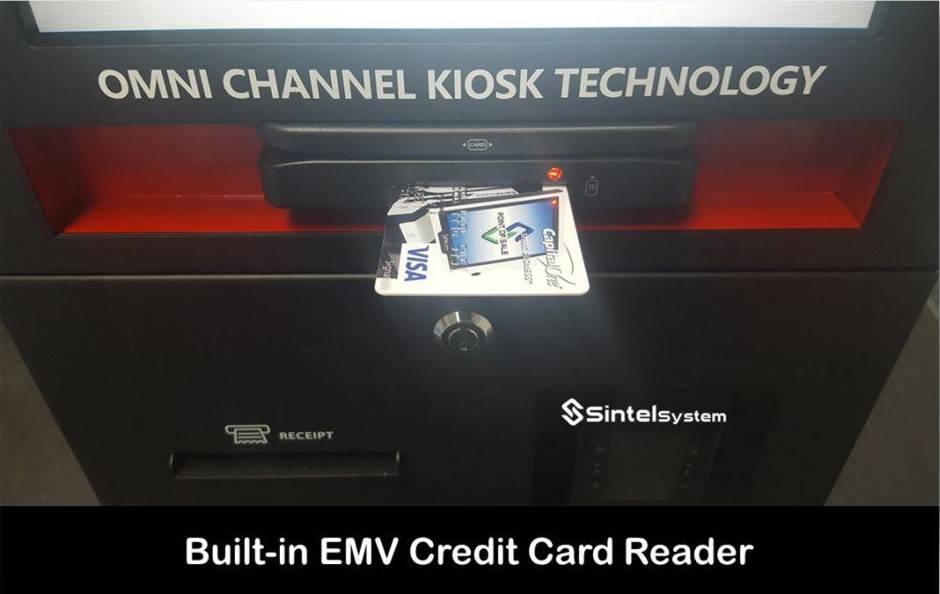 Sintel Systems offers competitive merchant account rates that allows you to save while enjoying great service and having one point of contact for all your POS needs from top grade hardware, under friendly software, all inclusive technical support, embedded merchant processing, private clouds services, direct online ordering, mobile app, and gift/loyalty network.

If you are interested in further understating the difference between poorly integrated merchant service and Sintel Systems innovate embdeded platform, please read on.
Sintel Systems, as a direct processor, is asked the following question from potential clients who have never had experience with a POS system before:
Do you integrate with a third party for payment processing?
The short answer is that we used to prior to the introduction of EMV (Chip Cards) in 2016, but cannot due to 1) technological challenges, 2) practical implications, 3) decrease in customer efficiency/satisfaction, and 4) since rates are now commoditized any perceived savings are minimal or non-existent.
Our software and processing are embedded so there is not gray area of integration (see definition below).
The disastrous results of integration do not need any guessing as this experiment has plenty of mishaps prior to 2016 when integration was technically possible. Prior to the introduction of EMV there was third party integration software that allowed a POS systems to process transaction through third party banks. This proved to be a very disastrous experience for merchants and POS companies alike. It introduced three parties just in the merchant transaction part of the POS as follows:
1) POS Company
2) PC-Charge,
3) Third Party Bank
Each time an issue arose with the processing, clients would automatically assume it was the POS and call the POS company. In the majority of the cases, it was either PC-Charge or the banks issue that the POS company had nothing to do with and could not address. While Sintel Systems shares a very close partnership with our clients, when the clients would contact PC-Charge or the bank, they would reach an agent who really did not know or hand an immediate interest in the merchant’s issue.

In the “integration” area, there were clear losers and winners. The winners were:
1) The Third Party Bank that provided the processing, but was hands off when it came to the POS
2) PC-Charge that charged a licensing fee and annual support

The losers were:
1) The client who experienced issues with the processing and could not quickly resolve it
2) The POS company that had angry clients that inundated them with support calls that they could not assist with.

There is one other type of integration used by companies like Micros who provide a gateway to other processors, but charge a rate of $0.10 to $0.15 on top of the merchant fees.
The above issue associated with integration is most commonly referred to as “Discontinuity of POS Services & Components.” This terminology refers to POS systems whose various components are procured from different vendors. Natural gaps or discontinuity occurs at the point of contact between two components where gray areas or no point of responsibility exists.

These problems are best exemplified in the POS software and merchant account components of the POS system. Discontinuity is most prevalent when POS software and merchant account processing are sourced from two vendors with claims of integration. The same is also true for all other components sourced from multiple vendors (i.e. hardware & software, support & software, hardware & warranty, etc.). From strictly a technological perspective, the level of alleged integration between a two-party POS software and merchant processor has barriers which are much less cohesive than most end-users would presume. This is not due to a lack of effort or desire by POS software developers or merchant account processors to increase cohesion. Factors negating integration include:
a) Fundamental technological circumstances,
b) Ever evolving security concerns,
c) Cost resources allocation, and
d) Level of access each party is able to provide the other

These are all barriers to bona fide integration. The fourth point (d) is much more easily understood as each entity moves to protect its business secrets and inadvertently compromises the end users best interest. As an example, in the integration process, the software company does not provide its source code to the processor, and the payment processors do not reveal their proprietary technology to the software provider. Since the majority of integration work falls with software developers, there are also costs that need to be recouped and ultimately increase cost to end users. This discontinuity in two technologies understandably contributes to decreased security, lapse of service, and lowered security with increasing cost.

The overriding challenge from a service perspective is the creation of a “no-man’s land” at the point where the software meets the merchant account. It’s an area where both service and security drop since a clear point of accountability is difficult to ascertain at the most crucial point.

During our random surveys prior to 2016, Sintel Systems has staff engaged cashiers casually at various establishment that do not have a Sintel System and were known to have merchant integrated systems. Research has shown that cashiers are very willing to express their POS experiences. Given their continuous involvement, cashiers are best positioned to offer an unbiased perspective. The most common point of anxiety was “freezing systems” and “inability to process credit cards.” In almost all cases, the cashiers placed the blame on the POS system indistinguishable from the merchant account itself. They believed in all instances that it was the POS system which was malfunctioning. There is no expectation for regular employees to distinguish between the two; however, it further reinforces the point that users see the POS system as a single entity.
Industry-wide the majority of POS malfunctions and freezes related to payment processing are attributable to the gray area of integration. Transactional issues may be a result of either:
1) POS Software,
2) POS Hardware,
3) Lapse at area of integration (software & merchant account),
4) Merchant account (from POS to processors servers and beyond), or
5) Internet/phone connection.

In almost all cases, the first assumption is to place the blame on the POS system (i.e. software) by the great majority number of users when experiencing transactional issues. This is shown by the overwhelming number of calls POS software companies receive due to transaction failure in cases POS systems with multiple parties involved. Ironically, the majority of transactional issues are found within the integration area or the merchant processor. The integrated merchant account actually impacts the POS software much more compared to the opposite. This is due to the resources utilized by the entire discontinuous process which places strains on various systems components and leads to overall under performance.
Security is also an ever increasing concern in today’s market and especially POS systems which have been under attack in recent years. Nationally publicized cases such as hacking at the retailer Target, where millions of consumers charge card information were stolen, have placed this in the spotlight. It may not be widely known, but the ultimate responsibility of maintaining the customers information safe and secure rests with the business owner. This is further exhibited by the introduction of EMV where a liability shift occurs (from merchant processors/banks to merchant) in cases of alleged fraud. The addition of every extra party in the POS system not only increases security risks, but also decreases accountability as the ability to assign responsibility decreases as the number of involved parties swells. This is likely the reason PC-Charge refused to produce third party integration software at the introduction of EMV. In addition to the lapse in service, the ability to increase security is yet another reason to eliminate extra parties from this sensitive process. Similar to an actual gate, fewer parties with keys to open the gate will increase security and accountability.
The POS system is one of the most important components of an operation and it is intended to make a business more efficient. Sintel Systems is the industry only single-source and direct POS solution provider allowing our clients to call a single number to address all of their POS related needs.

Before 2016
Our customers had the option of choosing any credit card processor they wish, however all processors other than our direct one required the need for a software called PC Charge for integration. PC Charge was provided at a cost of $359 for the license, which is paid directly to PC Charge. Also an average credit card transaction takes about 12-15 seconds to process using PC Charge, compared to 3-4 seconds with direct processing. At that point our clients continuously choose Sintel Systems and saved on the cost of PC Charge, got the fastest processing times possible, and took advantage of the support offered by Sintel Systems. We offer the best of both worlds, great value and unparallelled customer service.